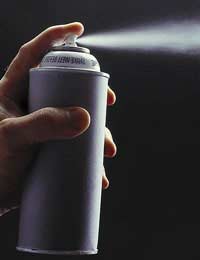 The effects experienced from solvent abuse vary greatly depending on the individual, the type of product used, and the amount taken.

These products are found in most households and are not thought of as particularly dangerous in their intended capacity, and it’s these factors that allow users to gain access to them without much effort or dishonesty.

The products mentioned all emit vapours that are inhaled deep into the lungs via the nose or mouth using a bag, a soaked piece of material or by directly inhaling the product from the packaging it’s sold in.

The initial effects felt from inhaling a volatile substance are increased confidence, mind-alteration and a general feeling of intoxication.

The most severe effect of solvent abuse is death. This can occur for a number of reasons and can happen following a singular dose and to a first-timer.

As the effects of inhaling solvents can cause intoxication of a similar nature to alcohol, inhibitions are lowered and confidence can grow. This causes users to be more reckless and take risks leading to accidents, some fatal.

Suffocation can occur if other paraphernalia is used such as polythene or bags. The user can inhale it as they reach their ‘high’ or pass out with their face embedded in the plastic.

This level of intoxication can cause the individual to vomit, sometimes if the person is losing consciousness or is drowsy, they can choke to death.

The effects of some substances, particularly lighter fuel, can cause arrhythmias of the heart (irregular beating), and can lead to cardiac arrest.

Slurred speech, memory loss, being unstable on their feet and headaches are all common side-effects of volatile substance abuse and can easily be confused for drunkenness.

An obvious sign of ongoing solvent abuse is a very noticeable rash and spots around the nose and mouth; this can become permanent in long-term users.

Long-term use can also lead to liver, kidney, heart and brain damage, some of which can be irreversible. Also seen in long-term users is depression due to the substances effects on the central nervous system, involuntary muscular movements and problems with fertility.

Nausea, vomiting and dizziness are all often felt by inexperienced users.

Hallucinations have been reported by some users, and these can be either euphoric experiences or be quite frightening.Most ‘hits’ carry an immediate high lasting a few minutes, with lasting effects of up to 45 minutes, when another fix is needed, this leads to a dependency and tolerance that will require the user to inhale larger and more frequent doses.

As with many addictions, mood swings, irritability, changes in appetite and sleep pattern and aggression are all likely to occur in long-term and fully addicted people.

The Relationship Between Addiction and Crime
Share Your Story, Join the Discussion or Seek Advice..
[Add a Comment]
I'm 25 turning 26 in a couple weeks, I've been on solvents for half my life on and off, I've been clean for maybe four months or so, there was a period where I was using meth and solvents with very little to eat during the week and having to seek help from government agencies to use for food, normally spending half of it or all, on drugs, i started using solvents at the age of 11 or 12, a lot of people who knew me during early days would say I was a smart one till I started using drugs and stuff, nowadays I find it hard to retain knowledge that's needed, I don't work due to mental health and I also now have the IQ of a paddle crab, was it worth it? Nah it wasn't so my advice to all of you, stop before you start you wouldn't wanna end up like one of my uncles who has the tremors, partially blind, can't think for himself, gets picked on for being a glue sniffer, lost a majority of the time, spends any bit of money he gets on glue, and finally looks like a living skeleton, I'm glad I quit while I could, yet still prone to going back to it when things get tough
Kdawg - 12-May-19 @ 10:18 AM
My 26 old son used gas for about 6 years solid, & on & of after, his having test now for blackouts, headaches, pain in the eyes with lights, do you think it may be down to the gas, & if so is the treatment, at 1 stage he was but on to a ventalater,
charlie - 12-Jun-13 @ 9:39 PM
im 17 And at 3 year back i used to inhale aerosoles coz of the peer pressure thing is ive stopped for 3 years but im now noticing slight problem with my breathing especially when i do running and also i get quite lathargic (lack of energy) and dizzy to. I'm recently starting to have the stuff thats stuck in my throat come out but im worried my breathing and my lungs wont get better. Is there something that can help me get better appart from fresh air which i door is it irriversible and il just end up getting worse even tho the stuff in mythroatis clearing and if it can get better how longroughly before it does
kitty - 28-Sep-12 @ 3:03 AM
My son is going to die from solvent abuse. He has been using for 3 years, 2 of which he spent in jail for attacking my daughter and partner after using gas. He was clean for 18 months, has come home and gone back on it. I have lost all my friends due to him asking and begging for money. I do not no how much more I can take. I have been to my doctor. They say they cannot help. I am afraid what he will do next. I am 60yrs old and I am scared i will be burying my own son soon. Just wish someone could help us.
maggie - 2-Aug-11 @ 11:21 PM
I am only 14 and I went threw a stage were me and my mates thought it was cool to inhail deodorant. I did it on and off for about a mounth and now im pretty sure I have involuntary muscular movement because now I always feel twitching in my body. Should I be worried about it? Will it go away over time?
bazza - 17-Apr-11 @ 2:47 PM
Title:
(never shown)
Firstname:
(never shown)
Surname:
(never shown)
Email:
(never shown)
Nickname:
(shown)
Comment:
Validate: